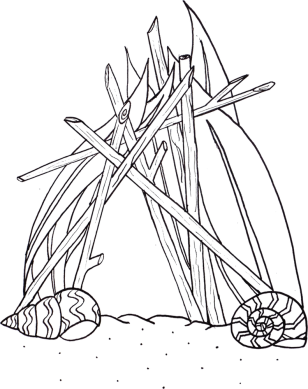 Henry the Crab was born just like every other crab was born; with eight walking legs, two large claws, a hard shell to protect his body, two antennae and two eyes. All the other crabs, however, were able to get their two front claws moving as fast as they could and dig themselves a perfectly-sized hole in the sand to help keep them safe and give them a home to rest in for the night. But not Henry. Henry had to spend his days running across the hot sand, trying to escape from the dogs and birds who wanted to play with him or, worse, eat him for their dinner. Henry got very good at hiding behind logs and camouflaging himself against appropriately coloured backgrounds, but he still felt incredibly sad. He spent a lot of his day asking other crabs if he would be allowed to share their crab home with them and they would always have a reason to say no.
“I’m allergic to other crabs, sorry,” some would say.
“It’s already a little crowded down here,” others would say.
The very clever among them would say, “My walls have just been fixed and I don’t want to risk another cave-in.”

Each night, as the sun set, Henry would watch as other crabs were invited down into the holes and, when all of the crabs had made their way underground, Henry would have to try and sleep, scared and alone on the beach. He could hear the crabs enjoying themselves beneath the surface of the sand and he would place an ear to the ground and close his eyes, imagining what it must be like to enjoy the company and comfort below.

One bright morning, Henry was running away from an energetic puppy as fast as his little crab legs could carry him. He would run several metres ahead of the puppy. Stop suddenly. Look around. Then quickly run off again in a safe direction. Each time he went to go down into another crab’s house, the crab would push him back out, so he tried his luck by hiding in the sticks and leaves near the grassy edge lining the beach. Henry began to relax as he watched the puppy run away, sniffing the ground in hopes of finding the hiding crab when a tiny, unexpected voice appeared behind him. “Shouldn’t you just, you know, dig?”
Henry turned around and saw a firefly clinging upside down on the inside of the log where he was hiding. He stared at the firefly but didn’t know what to say.
“Ohhh. Can’t dig, huh? That’s a real shame. Best you learn how to make some huts above the ground to keep yourself safe then. Here…”, the firefly flipped himself so he was now right-side-up on the ground. “I’ll show you how.” For the next hour, the firefly taught Henry how to build huts from things he could find on the beach.

Henry took Firefly’s advice and began gathering twigs to stick in the sand like little tee-pees and folding leaves to place over them. Some huts were better than others, and many were washed away by some of the bigger waves. “What are you doing, now, Henry?” some of the crabs ask him while chuckling together. “Can’t dig down so you’re building up, huh?” Henry ignored them and carried on making his huts above the ground. By the time he had finished, there were hundreds of tiny little huts where Henry could rest during the night and, hopefully, keep himself safe during the day.

That night, as the sun went down, Henry curled up in a hut and tried to go to sleep. The crabs below him were being very noisy this night and Henry lay in his hut feeling lonelier than ever. He got up in the hopes of finding a different, quieter hut to sleep in and, as he walked outside, he saw the firefly he had met earlier. “Can’t sleep, huh?” The firefly asked. “Well, neither can we.”
“We?” asked Henry.
“Yeah,” said the firefly nodding his head, “You know… ‘us’.”

Henry wanted to ask more questions but he was distracted by the fact that the firefly’s back had started to glow. Dimly at first but growing in brightness with each pulse of light. Suddenly, the firefly leapt​ up from the ground and started flying into the sky. Henry watched with awe as the firefly’s glowing back moved through the darkness. He noticed another firefly, and another and another. Soon, the sky was filled with fireflies dancing above him, their glowing backs mimicking the twinkling of the stars above. Some of the fireflies started to fly into the huts that Henry had built, making them glow like tiny lanterns spread across the beach. Henry took a moment to enjoy the amazing sight before him and a smile crept across his face. One firefly started singing a beautiful song and, before long, all of the fireflies were singing in harmony, their voices and light shining across the beach.

A baby crab, who could hear the singing from beneath the sand crept up out of his hole and could not believe his eyes. As his mother came out of the hole to try and pull her baby back down, she became struck by the sight of thousands of glowing and singing fireflies. Word spread quickly and, one by one, the crabs moved their festivities to the beach itself. Thousands of crabs and fireflies filled the beach with singing and dancing, being sure to include Henry who was as happy as he had ever been.

Many of the crabs stayed with Henry into the morning and although their attempts to teach Henry to dig were not successful, they agreed to sleep in shifts from that day on. Half would sleep below the sand, and the other half would sleep above it, enjoying the nightly shows put on by Henry’s huts and his firefly friends.