IN CASE YOU MISSED IT, YOU CAN READ  PART ONE BY CLICKING HERE! 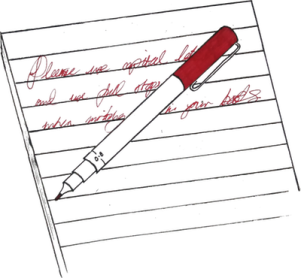 There were monsters with lizard-type legs clinging to the ceilings, monsters with five eyes and green heads slobbering all over students’ work and bright pink monsters with two sets of sharp teeth and tentacles eating all of the fruit and sandwiches left over from the students’ lunches straight out of the bins! As quickly as she had opened the door, Sophie closed it behind her and ran and hid in the school playground. She watched and waited, peeking out from her hiding spot in the blue tunnel every now and again to see if any of the monsters had spotted her. After a while, she realised she was safe and, as soon as the real 4pm arrived, her mother walked out of the staffroom and collected her daughter as if nothing had happened.

So, here she sat, in her classroom knowing very well that her history teacher, all of her previous teachers and her own mother, were actually monsters. And, after planning her escape for the past week, Sophie was finally ready to put her plan into action. The idea was to hop onto one of the school buses as soon as the bell went and to hop off at one of her friend’s bus stops. She would then be able to explain what was happening in secret. As soon as the bell went, Sophie packed up her books and made sure she got herself mixed up amongst the small crowds heading for the busses. She spotted her friend, Monika, and tried to follow her on to the bus. She was about to make it past the last step when was stopped by the driver. He gave Sophie a funny look before telling her that he didn’t recognise her and asked to see her bus pass. Sophie barely had time to utter a sound before she was interrupted by a loud voice coming from behind her. “And where do you think, you’re going, Miss Smith?” Sophie turned around slowly and saw Mrs Lane standing outside, tapping her feet with her arms folded. “Your mother would be worried sick if you run off like that. Best you stay here at school. Yes?” Sophie swallowed and nodded before walking off the bus in embarrassment.

Instead of taking her to see her mother, Mrs Lane escorted Sophie to the chairs outside the headmaster’s office where she sat for what felt like an eternity. Sophie was about to try and make a run for it when her mother walked around the corner and threw her arms around her. “Oh, my baby girl!” Sophie’s mother said in relief. “Mrs Lane told me what happened and I want you to know I understand.” Sophie wasn’t sure what to say. “You know,” Sophie’s mother said, “My mother was a teacher and so was her mother before her. This means you belong here at school, Sophie.” She grabbed Sophie’s hand and said, “Here, I’ll show you.” Sophie’s mother opened her daughter’s palm, put a red pen in it and closed her fingers around it tightly. Sophie’s eyes widened as she looked down and watched as her hand started to change from a regular, human hand into a bright, pink tentacle.