Hi everyone! Very privileged to be asked to take part in Sally Cronin’s weekly interview series, Open House. Sally’s four unique questions deserved some well-thought-out answers, so I opted to treat each response as its own piece of writing. This took a fair chunk of time to complete (on top of writing a new story every day!), so I hope you won’t mind me presenting my responses in four distinct parts. I’ll post half of the response here and, if you would like to keep reading, then you can click the link below and pay a visit to Sally’s incredibly active blog, Smorgasbord. Sally’s blog was recently nominated for Best Overall Blog by the good folk over at The Blogger’s Bash to be in held in London on May 19. I hope you enjoy this four-part series and best of luck to Sally!

Written and Directed by Richard Kelly 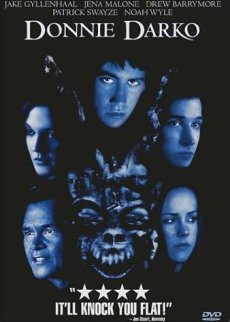 The atmospheres portrayed in my favourite films heavily influence the stories I write. It’s an inspirational feat when all of the elements of a movie come together, leaving you with an often inexpressible emotion long after the credits have finished rolling. Richard Kelly’s 2011 debut film, Donnie Darko, was the first movie I watched that showed me the power of a well-designed film while teaching me that I tend to gravitate towards narratives exploring the less illuminated aspects of our existence.

The opening scene establishes that the thought-provoking events about to unfold will take place in the leafy neighbourhood of Middlesex County, Virginia. The film’s central character, Donald ‘Donnie’ Darko, wakes up after a night of sleepwalking next to his bike in the middle of a winding road, chuckling as he overlooks the ominous mountains and valleys below. An eighties timestamp is masterfully imprinted onto the film when Echo & The Bunnymen’s, The Killing Moon, becomes the soundtrack to which Donnie calmly rides his way back home. A series of beautifully directed slow-motion interactions introduces us to Donnie’s stable, nuclear family consisting of his mother, father an older sister and a younger sister.

The intense elements of human relationships are explored throughout the film, constantly making it difficult for the interdependent narratives to fit neatly into the “science-fiction psychological thriller” genre under which the movie is often filed. The writing comes into its own when events that would typically be the focus of any other Hollywood production of the same genre fade away into the background, guiding your curiosity towards the enigmatic relationships transpiring between the characters. Events such as the giant, talking bunny rabbit that visits Donnie in the middle of the night to inform him the world is going to end in 28 days, 6 hours, 42 minutes and 12 seconds, become mere catalysts for the fact that every character is about to find themselves in an alternate, parallel reality, where their desires and dreams are eventually exposed and poetically shattered.